Want to start trading, but simply don’t know where to begin? We’ve put together a guide on how to get started. Learn how to get into trading and get ready to trade with us.
> Education >  What is Fundamental Analysis?

What is Fundamental Analysis?

Fundamental analysis is based on the notion that every asset has a real, fair value. However, at certain times, for example when traders have not yet taken account of new factors affecting this value, the market may not necessarily reflect the asset’s true worth. This results in the price being higher or lower than it really should be.

If you can identify when an asset is trading at a price that differs from its real value, you may have an opportunity to profit.

That’s because in these circumstances, fundamental analysts believe, the price will tend to naturally ‘correct’ over time, gravitating towards its real, fair value. So in fundamental analysis your aim is to discover assets that are currently under-priced or over-priced, then place trades to capitalise on their potential movements as the value corrects. 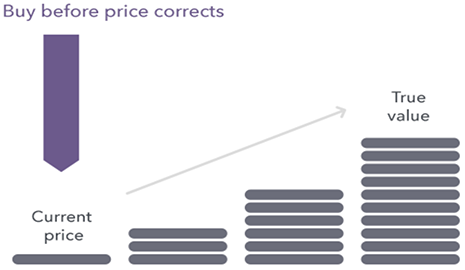 To illustrate how this works, imagine you see an attractive house for sale in an unpopular, run-down area. Suppose you do some research and discover the district is soon to undergo a major regeneration project – you might be able to buy the property at a low cost then benefit as buyers start to recognise its value, driving up the price.

A fundamental analyst might do something similar by buying financial assets that have hidden potential – particularly company shares, which we’ll focus on in this session.

How does this differ from technical analysis?

While both technical and fundamental analysis involve using information that’s available now to predict how a market might behave in future, they do this in different ways.

When you conduct technical analysis, you focus exclusively on price data and movements, seeking trends and patterns that indicate the likely future direction of a market. In fundamental analysis, on the other hand, you take a more holistic view and consider all the circumstances surrounding the market. You might evaluate the general health and wellbeing of:

This could include assessing all kinds of factors, from a whole country’s employment rates or manufacturing output right down to an individual company’s cash flow and expenditure. Fundamental analysis is often said to be more rigorous and comprehensive than technical analysis because everything that can affect the asset’s value is studied and taken into consideration, not just price data and chart patterns.

In practice, although you may hear people advocating the use of one form of analysis over the other, it’s normally wise to combine elements from both types if you want the fullest and most accurate picture of a market’s likely behaviour.

How does Fundamental Analysis work?

Rather than having one prescribed, universal method, fundamental analysis can be conducted in a number of ways. However, many analysts tend to use a top-down approach. This begins by considering the wider picture before progressively drilling down into the detail surrounding each market. 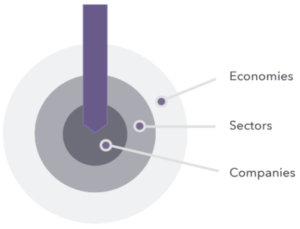 Let’s have a look at how you might do this. Suppose you’re thinking of trading on UK shares – here are some steps you could follow to analyse the market for potential opportunities:

What is the state of the UK economy, generally?

If an economy is in expansion, it’s reasonable to suppose that the industries and companies within the country will benefit and see growth in turn. Conversely, if an economy is declining then even successful businesses might suffer.

To determine this, you could look at macroeconomic data such as GDP figures, manufacturing output, the Consumer Price Index (CPI), retail sales, house price indices or employment statistics. And of course, you should also consider news coverage and political rhetoric – even if sometimes it has to be taken with a large pinch of salt.

2. Assess which sectors will be affected

How will macroeconomic factors influence different types of business?

When an economy as a whole is expanding, certain industries may benefit more than others. For example, when consumers have more money in their pockets, the services industry tends to enjoy the effects of their increased spending. On the other hand, utilities businesses will usually be largely unaffected.

There can also be times when economic expansion has a universally beneficial effect that is felt by most sectors and companies. In this situation, the overall risk in equities could be relatively low and it might be worth considering a strategy geared towards growth. For example, you could focus on a sector such as technology or biotech, as these tend to have a high potential for rapid expansion when conditions are favourable.

On the other hand, if an economy is expected to shrink you might decide on a conservative approach, investing in stable companies that are geared towards income. An example would be buying energy or utility stocks.

Alternatively, you could aim to capitalise on an expected fall in the markets by going short – a concept we cover in the ‘How trading works’ course. In brief, this traditionally involves borrowing a stock, with the intention of selling it then buying it back later at a lower price. A more accessible way to take a short position is via a spread bet (UK and Ireland only) or CFD trade.

3. Select a sector to focus on

Which sector has the greatest potential?

Having identified some industry sectors of interest, the next step is to consider levels of supply and demand for the products or services in each, and the other factors affecting their future prospects. You could look at the size of the market, its overall growth rate and the sector’s significance in the economy as a whole.

For example, let’s take the electricity component of the utilities sector. The size of this market in the UK is linked to the size of the population, so it will grow as the number of people consuming energy increases, The sector will always be supported by a certain level of demand for electricity to power everyday activities, however this can also be increased or decreased by the rollout of new technologies. So it’s worth considering what innovations might soon hit the mass market.

By contrast, the mining sector tends to have a much more variable growth rate, tied to the cost of extracting raw materials from the earth. While new discoveries can provide a significant boost, the sector can also be hit by fluctuations in global demand. Events like a slowdown in China’s economy can reduce consumption of raw materials for construction, impacting mining companies.

In the stock market, it’s typical to see particular groups of shares moving together in the same direction like this. So for that reason it can be more important to choose the right industry to trade on, rather than simply the right company’s share.

Now that you’ve decided to focus on a particular industry, the next task is to take a closer look at its constituent companies and decide which ones to explore in more depth.

At this point it’s important to take stock of the competitive landscape within the sector and any anticipated future business trends. Here are some questions that may help:

By thoroughly analysing the business environment, you should be able to see which companies have an edge over their rivals. These are likely to be the ones worth investing in, and we’ll explain how to delve further into their prospects in the next lesson.

It’s worth noting that when you conduct fundamental analysis like this, you should always be ‘comparing apples with apples’ at each stage. In other words, when looking at a country’s economy, you compare it with other countries’ economies. When assessing industry sectors, you view them alongside other sectors. And when you come to individual companies, you contrast them with other companies in the same sector. For example, if you were looking at Barclays you’d compare it to another bank, such as HSBC, and not to a retailer like Tesco.